FREE EXPRESS SHIPPING ON ORDERS OVER $50

or seven years, this was everything I owned: A MacBook Pro, an iPad, an unlocked iPhone, seven shirts, two pairs of jeans, two jackets, one coat, one sweater, two pairs of shoes, a suitcase, a backpack, some gym shorts, bathroom stuff, socks and underwear. That’s it. Everything I owned could be easily packed into a small suitcase and moved within thirty minutes.

In Fight Club, Tyler Durden made the bold claim: “The things you own, end up owning you.” Although I think that’s true, I’m not going to be a zealot here and try to convince you to throw away all of your possessions and go live on a mountain or something. Obviously, you have a life and a home, perhaps a family, and needs, and a radical shift in lifestyle wouldn’t be practical for many of you. These days, it isn’t for me either. I have commitments and obligations and people who depend on me now, so I’ve had to root down.

But what I am going to try to convince you is that you probably don’t need as much of the stuff you think you do and that getting rid much of it can be surprisingly liberating as well as make you happier.

Back in 2007, I went broke after graduating from university. To deal with this, I sold most of my possessions and moved onto a friend’s couch temporarily. At the time, it was painful. I had to get rid of my bed, my desk, a lot of my books and CD’s, pictures, and who knows what else. It felt excruciating. But despite my perception of “selling everything,” I still moved into my friend’s place with two large boxes of crap, a full suitcase of clothes, desktop computer, desk chair, guitar, TV stand (don’t ask) and other odds and ends. For the six months, I lived on that couch, 75% of everything I owned sat neatly in boxes, untouched.

The next year, with a struggling online business, no money, and nowhere to go, I moved home to live with mom for a while. Since shipping a box full of stuff from Boston to Texas was expensive, and I was surviving almost solely on peanut butter, I jettisoned even more stuff. On Craigslist, everything went: goodbye bicycle, messenger bag, the high-end poker chip set I won in a tournament, framed pictures, dumbbell weights, yoga mat, basketball, Playstation 2 and games. It hurt. It’s funny now, but looking back I really felt like a failure because I was selling all of my possessions to keep my business afloat. Like it was this massive sacrifice. Aside from my clothes and suitcase, all I kept was my guitar and a small box of books.

Six months later, I began my foray into the digital nomad lifestyle. I visited Brazil and moved to Buenos Aires. I took one large suitcase with me and spent hours the days before I left deliberating over how I was going to fit everything I “needed” into one single suitcase for 3-6 months abroad. Which tools do I bring? Which raincoat should I bring? Fitness supplements, external hard drives, an extra pair of running shoes, clothes iron and cooking spices all seemed like necessities at the time.

I was an idiot.

I didn’t use half of the stuff I packed. I started a habit of unloading unnecessary junk by leaving them in apartments, hostels, and hotels I stayed in. Finished reading a book? Here you go, intrepid next traveler! Eventually, I ended up with the small suitcase of a week’s worth of clothes and a laptop and essentially lived like that for most of my 20s.

That may sound a little extreme to some of you. And it is. But… and this is a big “but,” so I’m going to bust the italics out: Every step along the way, getting rid of what I didn’t absolutely need was painful, but at no point did I ever miss anything once it was gone. Ever.

I don’t remember most of the crap I owned, much less miss it. I couldn’t tell you what hung on my wall, what the color of my couch was, where I bought my television, which video games I owned without thinking very, very hard.

In fact, not only do I not miss anything I got rid of, but the thought of spending money on more of the same possessions instead of life experiences and relationships with others sounds absolutely insane to me now.

There are two psychological factors at play in owning a bunch of stuff and I think both lower the overall quality of life: identity investment and loss aversion.

Identity investment is what Fight Club ribs at when it makes fun of the need to own a bunch of nice stuff–people tend to become emotionally attached to their possessions and see their possessions as a part of themselves. This is particularly true in more materialistic cultures where people are encouraged to express their identities through consumerism. People become attached to the companies that make their car or truck, their computers, their clothing, their appliances, etc. They spent months saving up for an item, spent a lot of mental energy choosing which item “represents” them best, therefore they begin identifying themselves as a “Ford guy,” or a “Mac user,” or whatever.

This becomes part of your identity, no matter how small, that you portray to others in your life. And if you’ve learned anything from this blog, it should be that investing your identity in factors outside of yourself (sexual interactions, what people think of you, how much money you make, stuff you own) isn’t healthy and generally backfires. 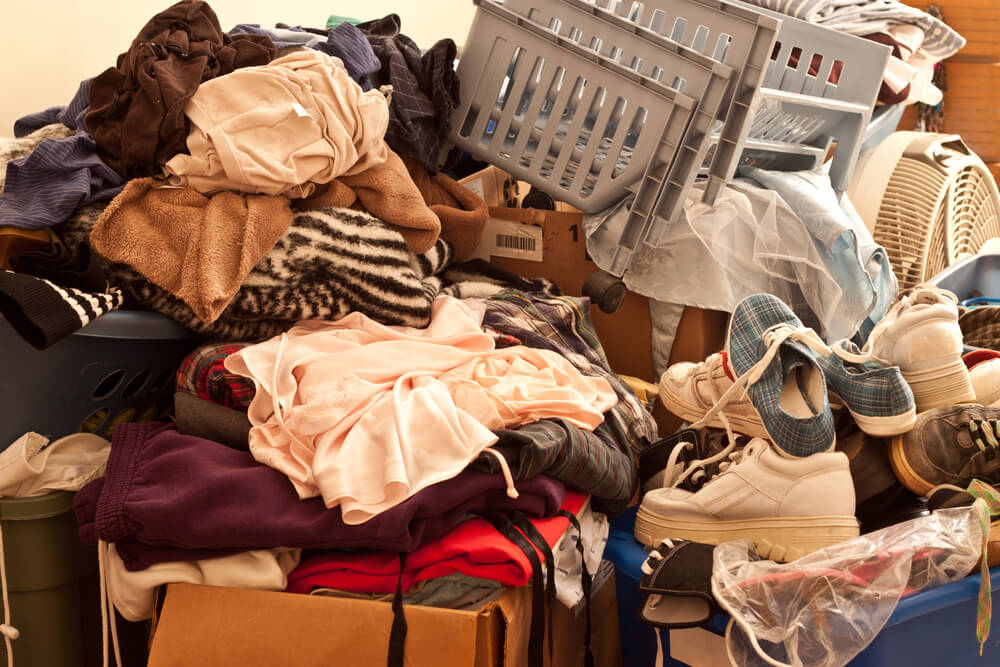 The second factor, loss aversion, is a sad fact of life. Psychology has shown that humans perceive the pain of losing something to be much greater than the pleasure of having it. This is true for everything — relationships, possessions, competition — and it’s hard-wired into us. All of us. So that poker chip set I won and swore I had to keep and felt crushed when I had to get rid of it, I never actually used it once when I owned it. The guitar that I thought I loved just sat collecting dust, yet I couldn’t bear to allow myself to sell it.

Happiness studies consistently bring back a couple of findings: 1) that we derive far more happiness from experiences than we do from possessions, and 2) that we’re better off investing our energy in our relationships than the things we own.

Getting rid of unnecessary possessions can therefore indirectly improve our quality of life through the following ways:

Keep in mind, the goal here isn’t to get rid of everything. It’s simply to get rid of things that don’t actively make you happy or improve your life. It’s about owning as little as possible to optimize one’s well-being and happiness.

WHAT CAN YOU GET RID OF TODAY?

Now comes the fun part. Let’s talk about the useless crap you have that you can get rid of today. I’m going to start with the easiest objects to trash and move to the most difficult.

How to Reduce, Prevent, and Cope with Stress